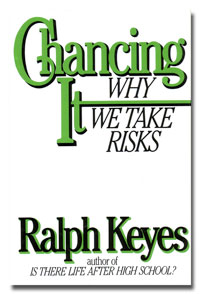 When was the last time you took a risk? Was it thrilling, scary, or both? Do you envy others who summon the courage to dare something you’d never try? Whatever risk actually means to you — whether it’s doing something for sheer adventure or making a life-altering decision — you may suspect that you play it much too safe.

Chancing It asks why so many of us feel that way. It is a provocative, in-depth look at the thirst we all have to both take risks and avoid them. But what do we mean by risk? According to Ralph Keyes, risk is not derived from an actuarial table but from our own inner feelings. “Risk,” he writes, “is in the fears of the beholder.” It is “any act one is afraid of taking.” What is risky to you may not be to someone else. If you can coolly strap on a parachute and leap from an airplane, but break out in a cold sweat at the thought of getting married, then you’re probably a Level I risk taker: one who requires intense doses of physical daring to get the adrenaline flowing. If you are willing to take the lower key, long-term risk of starting a business or staying married, but would no more ride a motorcycle than walk off a cliff, then you are probably a Level II risk taker: one who gets plenty of stimulation just crossing the street.

Either way, the chances we take, as well as the ones we avoid, say a lot about who we are. In order to help us understand our attitudes toward risk for our own benefit, Keyes examines a variety of risks and risk takers. He introduces us to wirewalker Philippe Petit who is afraid of spiders, snakes, and marriage. He talks to “pot stirrers,” who court the forbidden by shoplifting for the thrill of it, and engaging in sexual adventures. He profiles action addicts, such as a Vietnam veteran whose combat-induced craving for danger led him into drug smuggling. We also meet a woman who started her own business with a $500 loan, and a middle-aged man whose commitment to his wife and children spurred him to organize his family into a working jazz band.

Keyes concludes that taking genuine risks is necessary and healthy. Alas, the “American way of risk” glorifies physical daring at the expense of psychic risk, and has led to pseudo and vicarious forms of risk-taking that leave us hungry for the real thing. Keyes offers some perceptive suggestions for assessing our own attitudes toward risk, and taking risks that will enhance the quality of our lives.