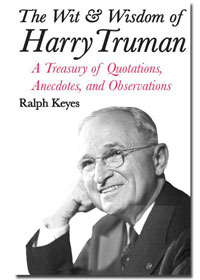 In an era of spin doctors, media consultants, and government by poll, it’s refreshing to read the words of a politician who knew his own mind and wasn’t afraid to speak it. This politician was Harry Truman. His pithy, forthright comments have survived the test of time. “Being a president is like riding a tiger,” Truman observed. “A man has to keep riding or be swallowed.” This is just one of the great wealth of quotes and anecdotes Keyes has collected. He has also included excerpts from Truman’s diaries, letters, speeches, and press conferences, such as the diary entry Truman wrote after becoming president: “Another hectic day in the executive office. Saw a lot of customers. Hope they all left happy.” The Wit and Wisdom of Harry Truman is a great resource for information about the man and his time.

This splendid little collection of pithy Truman quotes is a marvelous introduction to the most human president of this century. Divided into logical sections, a romp through the pages allows the reader to garner a quick but inclusive history of Truman’s public life.

After he left the White House, Truman was invited to visit San Francisco shipping mogul George Killion. When his driver got lost, Truman rang the doorbell of a nearby house and asked for directions. The homeowner couldn’t help him. “I hope I’m not hurting your feelings,” he did say, “but you look exactly like that old s.o.b. Harry Truman.”

“I hope I’m not hurting your feelings either,” responded Truman, “but I am that s.o.b.”