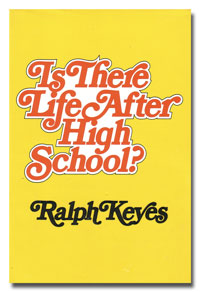 NOW AVAILABLE AS AN E-BOOK!

Were you Student Body President? Cheerleader captain? Or the girl nobody asked to the prom? Or a guy nobody wanted to eat lunch with? Were you an “innie” or an “outie”?

These are some of the questions raised in Is There Life After High School?.

After interviewing hundreds of people across America, obscure and famous, successful and unsuccessful, after reading countless magazine articles, books, and scholarly treatises, after listening to stacks of 45 rpm records, watching television and movies, and after attending all manner of reunions (from a fifth to a fiftieth), Ralph Keyes has come to the conclusion that Kurt Vonnegut was right — high school is “closer to the core of the American Experience than anything else I can think of.”

Is There Life After High School? takes us cruising through the hallways of our high school memories to study this national phenomenon as it is recalled by adults who were supposed to have outgrown it. (Oh yeah? Remember when you won or lost the class election, spent lunch hour alone in the cafeteria, caught the touchdown pass, or discovered a big, dark, round mark clearly visible around your armpit when you raised your hand in class?)

Ralph Keyes probes the meaning of those memories and others that are a) enduring, b) pleasurable, c) painful, d) all of the above. He uncovers the depths of feeling behind the exposed high school myths, traces patterns of success and failure, analyzes the roles played in our lives by the geeks, jocks, cheerleader, and bookworms we once knew. (Does it make anyone feel better to know that Henry Kissinger was called “a little fatso”?) Many of the country’s best-known scholars, entertainers, musicians, writers, and movie stars speak candidly — sometimes scathingly — about their high school experiences, including the man who defeated Gerald Ford for senior class president with a campaign promise of “rings and pins before Christmas.” P.J. O’Rourke explains why he constantly savages high school in his writing. And strangers eagerly volunteer to tell their reasons for going to reunions, what happened when they saw old friends — and enemies — and, for a few of the, what it was like to “go all the way” with a former flame years later.

In the end, Keyes makes some keenly perceptive observations on why high school keeps its grip on the imagination and behavior of so many American adults. He offers a closing section of inestimable value for those racked with high school fever — “101 Ways to Get High School Off Your Back.”

During the past decade and a half, a musical comedy based on Is There Life After High School? has been produced on Broadway, at Ford’s Theater in Washington, and hundreds of other theaters around the country. Since it strikes such a universal chord, Is There Life After High School? has become a staple of regional, college and high school directors. Its evocative songs include “The Kid Inside,” “Diary of A Homecoming Queen,” and “Reunion” (“Face the class/ Fail or pass”).

Since this book was published, the term “life after high school” has become a cultural catchphrase.  It was the title of a 1991 Joyce Carol Oates short story in The Atlantic, a line in a novel, the title of a  non-fiction book (Coping With Life After High School), appeared in a comic strip, and at least two movies. (In Rock ‘n’ Roll High School, a character shouts “There is life after high school!”)