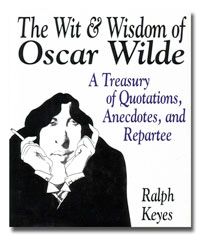 Nearly a century since his death, Oscar Wilde still intrigues us. This poet, novelist, playwright, and essayist was also his era’s leading aphorist. George Bernard Shaw called him “incomparably the greatest talker of his time — perhaps of all time.”

Wilde claimed he could discuss any subject at any time prepared or not. A companion once took him up on this claim, asking that he discourse on the subject of “The Queen.” Responded Wilde: “The queen is not a subject.”

On another occasion, Wilde told a host that he’d toiled strenuously that day. “I was working on the proof of one of my poems all the morning and took out a comma,” he said.

“And in the afternoon?” she asked.

“In the afternoon,” responded Wilde, “– well, I put it back again.”

In The Wit & Wisdom of Oscar Wilde, Ralph Keyes has captured the verbal flair that delighted Wilde’s contemporaries. This definitive compilation includes material not only from Wilde’s better known works but also his more obscure reviews, letters and appearances in friends’ memoirs. It incorporates anecdotes that illustrate Wilde’s knack for repartee. When a journalist said he never discussed subjects on which he didn’t know the facts, Wilde observed, “That must limit your conversation frightfully.”

At the heart of The Wit & Wisdom of Oscar Wilde are Wilde’s best sayings. Some are witty: “Scandal is gossip made tedious by morality.” Others are caustic: “Mr. Henry James writes fiction as if it were a painful duty.” Still more show genuine wisdom: “Anybody can sympathize with the sufferings of a friend, but it requires a very fine nature to sympathize with a friend’s success.”

Oscar Wilde is as popular with readers today as he was in his own era. The Wit & Wisdom of Oscar Wilde shows why. His words in this book remain fresh, alive, and electric. They stride off the page and demand we pay attention, not just because he was clever but because he was wise. “For all of their verbal hijinks,” Keyes writes in his introduction, “many of Wilde’s observations displayed real perception. Amid the glitter of his wit lay nuggets of insight.” By winnowing Oscar Wilde’s best work into one volume, Keyes has given us a primer of one of history’s greatest personalities and most original thinkers.

Nothing worth knowing can be taught.

I can resist everything except temptation.

The truth is rarely pure and never simple.

Morality is simply the attitude we adopt towards people whom we personally dislike.

Children begin by loving their parents; after a time they judge them; rarely, if ever, do they forgive them.

The youth of America is their longest tradition. It has been going on now for three hundred years.

We have really everything in common with America nowadays, except, of course, language.

In the old days men had the rack. Now they have the Press.

All women become like their mothers. That is their tragedy. No man does. That’s his.

Talk to every woman as if you loved her, and to every man as if he bored you.

I sometimes think that God, in creating men, somewhat overestimated his ability.

A poet can survive everything but a misprint.

Only dull people are brilliant at breakfast.

Experience is the name everyone gives to their mistakes.