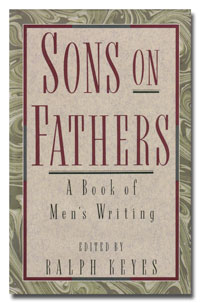 Ralph Keyes spent years collecting sons’ writing about their fathers. In Sons on Fathers he’s gathered the very best. Authors include Lewis Grizzard, Patrick Hemingway, John Cheever, Pete Hamill, Lewis Thomas, Louie Anderson, Jimmy Carter, and dozens more. The book is organized to illustrate the evolution of son-father feelings: from adoring childhood through rebellious adolescence to edgy adulthood and the years of reflection following a father’s death. Emotions run the gamut from love, respect and pride to hatred, jealousy, and anger. Some men depict a heroic struggle to square things with their fathers while they are still alive. Others try to come to terms with memories of their fathers once they’re gone. Fathers and sons everywhere will recognize their own experiences and feelings in this book. Sons on Fathers is an important, intimate look at the relationship between men and their dads.