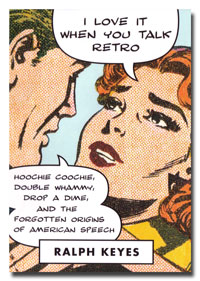 “You sound like a broken record” doesn’t make much sense to a generation that grew up with iPod buds in their ears. Terms such as “stuck in a groove,” and “flip side” could also be perplexing. Today’s Gen-whatevers may not know who Nurse Ratched is, the size of a breadbox, or why “going postal” refers to a major uproar.

I Love It When You Talk Retro discusses verbal artifacts such as these, ones that hang around in our national conversation long after the topic they refer to has galloped into the sunset. This could be a person (Gorgeous George), product (Edsel), past bestseller (Catch 22), old radio show (Gang Busters), comic strip (Alphonse and Gaston), or long-forgotten advertisement (“Where’s the beef?”). We all use the catchphrase Cha-ching! but how many realize that this slang term for money was introduced in a 1992 ad for the Rally’s fast food chain?

Ralph Keyes takes us on an illuminating and engaging tour through what he calls retrotalk. His book explains where retroterms come from and why they’ve struck a chord. “Mrs. Robinson,“ the seductive character Anne Bancroft played in The Graduate, is far more evocative than “an older woman who seduces a younger man.” Cootie is much more fun to say than “lice,” doofus more pithy than “a clueless individual.” Yet few who use such terms realize that the former originated as World War I soldier slang, the latter in the comic strip Popeye.

I Love It When You Talk Retro will enrich the reader’s store of language lore. This journey along the highways of history and byways of culture is an invaluable guide for anyone who’s ever wondered “Where did that term come from?” Ralph Keyes’s book answers this question. Repeatedly. And is a lot of fun to read.