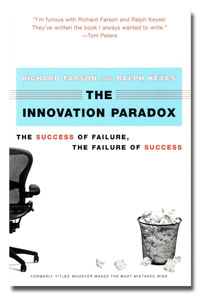 In The Innovation Paradox (originally titled Whoever Makes the Most Mistakes Wins), Richard Farson and Ralph Keyes argue that failure has its upside, success its downside. These two are not as distinct as we imagine. They co-exist, are even interdependent. Both are steps toward achievement. It’s not success or failure, but success and failure.

This truth has relevance to today’s business economy. Success there demands nonstop innovation. Genuine innovation cannot be achieved with obsolete formulas. Only an entirely new mindset will revolutionize managers’ thinking on this subject. According to Farson and Keyes, the key to innovation lies in taking risks. Doing this requires changing the way we think about success and failure. In a rapidly changing economy, managers will confront at least as much failure as success. Does that mean they’ll have failed? Only by their grandfather’s definition of failure. Both success and failure are steps toward achievement, say the authors. After all Coca Cola’s renaissance grew directly out of its New Coke debacle, and near- bankruptcy forced IBM to completely reinvent itself.

Wise leaders accept their setbacks as necessary footsteps on the path towards success. They also know that the best way to fall behind in a shifting economy is to rely on what’s worked in the past as when a once-innovative company like Xerox comes to rely too heavily on a once-successful formula that’s grown obsolete. In the process they become failure-phobic. By contrast, companies such as GE and 3M stay vibrant by encouraging innovators, even when they suffer setbacks. Farson and Keyes call this enlightened approach “productive mistake- making.” Rather than reward success and penalize failure, they propose that managers focus on what can be learned from each. Paradoxically, the authors argue, the less we chase success and run from failure, the more likely we are to genuinely succeed.

Rather than reward success and penalize failure, they propose that managers treat both alike. Not with rewards or punishments, but with engagement. Don’t penalize, they say, analyze. Focus on what can be learned from setbacks and triumphs alike. The best managers always have. Since failures so often lead to successes, and vice-versa, rather than try to sort these two out, wise managers focus on the innovation process and what can be learned from it. What went wrong? What went right? What can we learn from each experience?

In a concluding section Farson and Keyes suggest that we follow the lead of great coaches such as John Wooden and Phil Jackson and de-emphasize winning. Paradoxically, they say, this could be the best way to win. They call this approach “Samurai Success” after the Japanese warriors who focused their attention on full participation in a contest rather than on its outcome. The less we chase success and run from failure, the authors conclude, the more likely we are to genuinely succeed.