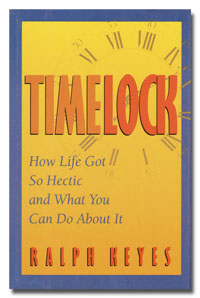 When traffic gets so congested that it can no longer move, engineers say it has reached a state of “gridlock”. According to Ralph Keyes, many of us are in a state of “timelock”. This is the condition that occurs when claims on our time grow so demanding that we find it impossible to wring one more second out of a crowded calendar. In this informative and entertaining book, which is filled with real-life examples, Keyes explains how we got ourselves into this exhausting position. He considers the “vanishing pause,” “speed inflation,” and “the convenience catch.” Paradoxically, Keyes says, a key source of timelock are the very tools we’ve adopted to save time: computers, faxes, microwave ovens. Keyes doesn’t just assess the sources of timelock but suggests how we can get out from under its pressure.