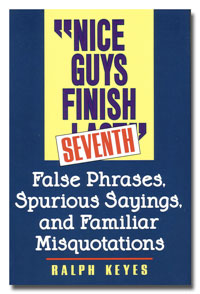 Leo Durocher is best remembered for saying, “Nice guys finish last.” He never said it. What the Brooklyn Dodgers’ manager did say, before a 1946 game with the New York Giants, was: “The nice guys are all over there. In seventh place.” Durocher’s words lacked pizzazz. Sportswriters perked them up, and gave America one of its most familiar misquotations.

Many of our best known sayings, phrases and quotations are inaccurate, misattributed, or both. “Nice Guys Finish Seventh” reveals that:

Hundreds of such examples illustrate Keyes’s Immutable Law of Misquotation: Misquotes drive out real quotes. “Certain things demand to be said,” he writes, “said in a certain way, and by the right person. Whether such comments are accurate is beside the point.”

Keyes confirms that William Tecumseh Sherman didn’t say “War is hell.” Nor did he vow, “If nominated, I will not run. If elected I will not serve.” According to Keyes such words voice observations we want made. Freud may never have said “Sometimes a cigar is just a cigar,” for example, but we certainly wish he had.

For a misquote to become familiar it must come from a well-known mouth. Take “You can’t trust anyone over 30.” Abbie Hoffman, right? Or was it Jerry Rubin? Mario Savio? Mark Rudd? All have been given credit for this 60s catch-phrase. Keyes discovered that its real originator was a student named Jack Weinberg. Remember him? Few do. That’s why Weinberg’s words were assigned to better known mouths.

Keyes calls this “the flypaper effect.” Orphan quotes or comments by unknowns routinely gravitate to a Churchill, a Lincoln, or a Twain. Other syndromes Keyes discusses include bumper stickering (condensing a long comment to make it more quotable), lip syncing (mouthing someone else’s words as if they were your own), and retro-quoting (putting words in the mouths of famous dead people). Separate chapters focus on misquotes in history, politics, show business, sports, literature and academia.

“Nice Guys Finish Seventh” is a fascinating, eye-opening book. It’s both fun to read and a reliable work of reference. By exhaustively researching the actual origins of famous remarks, Ralph Keyes has produced a provocative, authoritative guide to who actually said what.