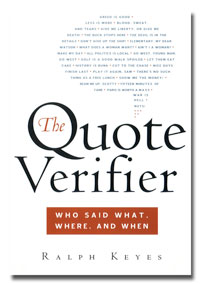 In the early stages of the Iraq war, variations on this quotation were ubiquitous: “No plan survives contact with the enemy.”  That thought was usually attributed to Dwight David Eisenhower.  Or did Napoleon say it?  George Patton perhaps?  No one seemed sure.  The observation actually originated with Helmuth Von Moltke in the mid-nineteenth century.  Von Moltke’s version was not so felicitous, however:  “No operation extends with any certainty beyond the first encounter with the main body of the enemy.” In a process that’s routine in the world of quotation, the Prussian field marshal’s actual words were condensed into a pithier comment over time, then placed in more familiar mouths.

The Quote Verifier discusses quotations like Von Moltke’s that are easy to cite but hard to confirm. Whenever possible it gives the correct wording and attribution of hundreds of quotations, old and new, whose origins are unclear. The Quote Verifier examines not only classic misquotes such as “War is hell,” and “Play it again, Sam,” but more surprising ones such as “”Ain’t I a woman?” and “Golf is a good walk spoiled.”

The Quote Verifier also explores popular quotations of uncertain origin, such as “The opera ain’t over ’till the fat lady sings,” “No one on his deathbed ever said he wished he’d spent more time at the office,” and “Academic politics are so vicious because the stakes are so small.”

For ease of use, the body of the book’s text is in dictionary form.  A brief discussion takes each quotation  as far back as possible to its original form, give credit where due, and expose quote thieves.  The correct wording of every quotation is given, whenever available, and our best knowledge as to who said it first.

The book’s introduction explores why we get so many quotations wrong.  One reason is that misquotes routinely improve on real quotes.  Bad memory can be a good editor.  Since quotations are most useful when they come from famous mouths, misattribution is routine.  This is due in large part to the “sounds like” syndrome, in which much-quoted figures such as Lincoln, Churchill, and Dorothy Parker are credited with comments they never made because these “sound like” them.  It also helps that such figures are not around the correct the record.  As a result, famous dead people make excellent commentators on current events.

Boxed sidebars break up the book’s text.  Some are mini-profiles of frequently misquoted figures such as Wilde, Shaw, Twain, and Yogi Berra.  Others discuss specific genres of misquotation: spurious “last words,” for example, and startling bad predictions that were never made.

The Quote Verifier is an invaluable resource to those who are at regular risk of getting their quotations wrong and might rather get them right: politicians, speechmakers, authors, journalists, and scholars.  For anyone interested in the actual origins of our words we commonly use, it is an informative, eye-opening book.